June 07, 2019
Want to write a back end web-service in Java and don’t know where to start? You’re at the right place. By the end of this article, you would have a springboot project running on a tomcat server, and you would also be able to create projects later without any difficulty.

I have worked with spring before, and the biggest advantage of springboot, at least when starting a new project, is that we don’t have to add entries and mappings for all our pages. In spring, the web.xml needs to contain all the mappings, which is not the case with springboot, which doesn’t have a web.xml file at all (it handles things for us). So let’s get started with creating a project.

Head over to start.spring.io and enter your project details, mainly the group id and artifact id. Under dependencies, make sure you add spring-starter-web, and you could add DevTools for faster reloading. You can also select a database dependency such as MySQL or PostgreSQL in case you plan on using it.

Once done, click on the Generate Project button, and it will start downloading the project as a zip file. Once the zip file is downloading, unzip the project and open it in the IDE of your choice. In case you’re using intelliJ (which I use), just open the pom.xml file, and it would give you an option to open it as a project. Add a tomcat plugin to the pom.xml file to add tomcat to your project (you could choose an alternative as well, such as jetty).

Once the project is open in the IDE of your choice, add a package under {your-group-id}.{your-artifact-id}, for example, in my case it could be something like com.shreyas.testproject. Let the package name be controller. Add a java class in this package (say, TestController). Add a Controller annotation to the java class, and add methods to this class, adding mapping annotations as required.

Use mvn clean install to build the project, and run the jar inside the target directory to run the project, with the command java -jar {jar-name}.jar . You can try the project in your browser at port 8080 if you have made no changes to the port.

You have a springboot web-service ready and running!

Popular posts from this blog 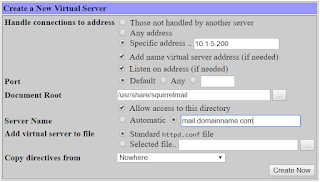 Here is the complete step-by-step procedure on how to create a mail server. (a)   Host a website from the server domainname. com and create a child of that website* called mail. domainname. com. (For help refer to )        * For the document root of the child, enter : /usr/shared/squirrelmail (b)   Create a user on the server from which you can later login into the mail server. (c)   In the Zone List within domainname .com, go to Mail Server. (d)   Within the mail server, add/edit the following fields : 1.  Mail Server : mail. domainname .com. 2.  Priority : 10 Note : Leave the Name field blank. Click on Create and then Save. (e)   Go to the Zone List of domainname .com and Click on Apply Changes . Alternately, you can go to the server terminal and use the command #service named restart . (f)   Go to the Webmin Index | Networking | Network Configuration | Hostname and DNS Client and make sure the following fields are as given here : 1.
Read more

Creating a Maven Web-Service in IntelliJ

Here is a step-by-step procedure on making a Maven web-service using Java in the IntelliJ Environment. Open IntelliJ and go to File > New project. In the popup that opens, select Maven on the left and check the checkbox Create from archetype and select maven-archetype-webapp. Give your project a group-id and an artifact id. The group id could be something like com.testpackage , and the artifact id something like testproject. Leave all other settings as they are and continue to finish. This should create a new project. In the pom.xml (or testproject.xml ) file, add the dependencies for rest-easy. Add the jetty plugin to the plugins block. We would be using the jetty server to run our web-service. (Note: This documentation assumes that you have maven installed and added to your PATH variable, such that you can use the mvn command from the terminal.) Add the following content to your web.xml file, which is present in src > main > webapp > WE
Read more